Wildlife in the French Alps 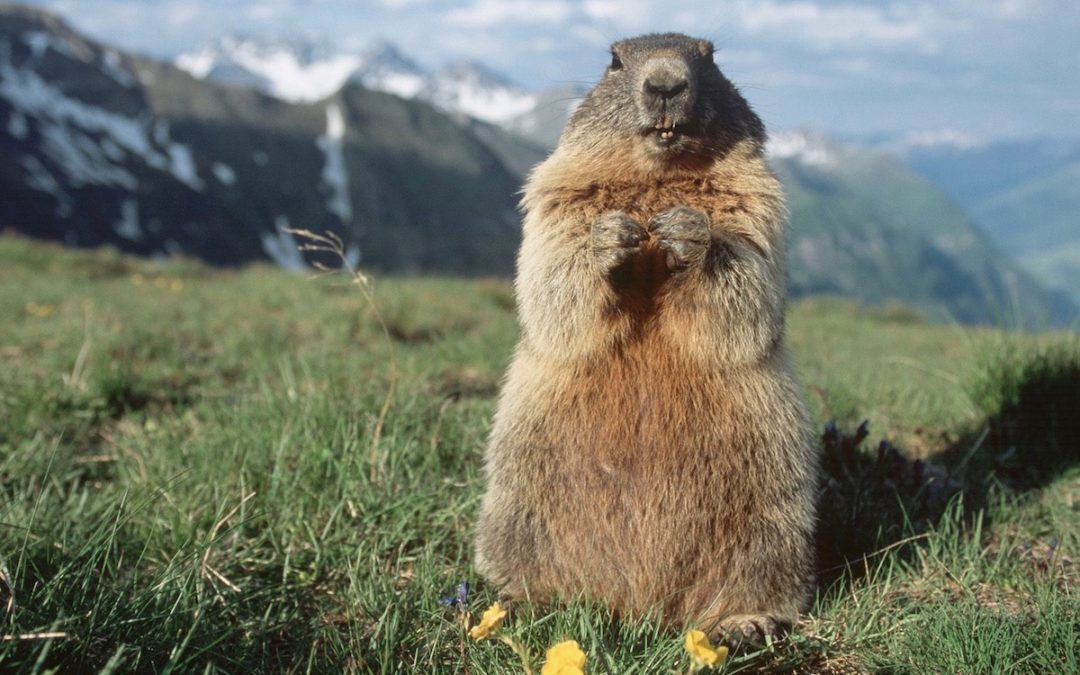 We feel incredibly lucky to live in the French Alps and have some of the most stunning scenery right on our doorstep. Both the Portes du Soleil and Le Grand Massif have some of the most incredible walks and hikes within a short distance from the town centres of Morzine, Samoens, and Morillon. In the Haute Savoie you can be walking along an enormous lake at over 1000m, then strolling along a beautiful meadow with a huge variety of flowers and butterflies, and then summeting rugged mountain peaks at well over 2000m in altitude all during the same day. To put this altitude into perspective the tallest mountain in the UK in Ben Nevis in Scotland at a meagre 1345m. We are also fortunate to have some of the most incredible wildlife with some of the animals being unique to the Alps. It is not uncommon in the same day to see Ibex, Chamoix, Marmots and even a Golden Eagle. Check out our below guide for what to keep an eye out for during a walk in the mountains. At Tasty Ski between June and September we offer self-guided walking ternaries in both Morzine and Le Grand Massif. Check out this link to know more about what is on offer.

These mountain goats have amazing curved horns that can reach up to more than a metre long. The Ibex were hunted to extinction but reintroduced to the Alps in the 1960s and can usually be found at around 1500 – 2000 metres in altitude. Unfortunately it was discovered in 2015 that Ibex were carrying brucellosis, a disease that can be transmitted to livestock and humans. An enormous cull followed through the lobbying of farmers worried about their livelihood, reducing Ibex numbers in the Alps significantly. 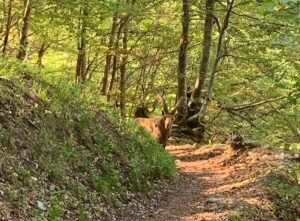 The alpine representative of the antelope family. Similar in appearance to the Ibex but smaller, with a dark brown coat and smaller curved horns. Their faces are striped cream and brown. They are more nervous than Ibex so you will rarely get close to them and they are hard to spot. Chamois are extremely agile because they have the ability to widen their hooves which become like crampons, allowing them to cling onto the steep mountain faces and rocks. Hunting Chamois is allowed as part of ‘Le Chasse’ but it has been restricted to a short period in the Autumn since 1982. 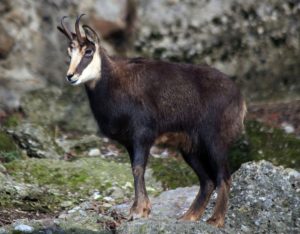 Large ground squirrels that typically live above 1000m in small colonies. If you hear a piercing high pitch whistle at altitude then it is likely to be a marmot. The whistle is how they communicate with each other, normally to alert other member so the colony to any potential danger so that they can rush back to their burrows. A single cry warns of an airborne predator, a series of cries indicates danger on the ground. When the weather is good they will consume a huge amount of food in order to create a layer of fat on they body, allowing them to survive their hibernation period during the winter. 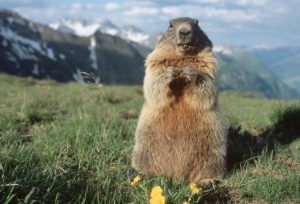 A subspecies group of wild sheep. Similarly to the Ibex they have impressively curved horns and Mouflon can weigh up to 20kg. Mouflon are not native to the Haute Savoie but they were introduced to the area by hunters from Corsica in the 1950s. At present there are only about 300 in the Haute Savoie, although many ecologists are against introducing more animals to new regions where they were never endemic. 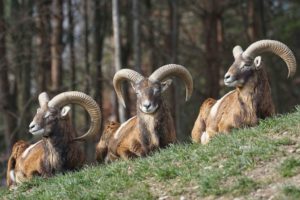 Generally found at lower altitudes in forest areas. This is not an animal you would like to meet face to face – they can we weigh up to 150kg and can be very aggressive when cornered. They are considered a problem by local farmers as they trample and eat crops throughout the year. They are social animals with the females and young living together while the males live separately outside of mating season. Wild Boar are omnivorous and will dig for roots and worms and eat rodents like lizards, berries and almost anything else they can find. They are hunted during ‘Le Chasse’ between September to January. 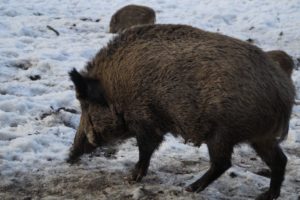 At the end of the 18th century there were between 10,000 – 20,000 wolves in France. They were driven to near extinction in the 1930s and sightings of them now in the French Alps are very rare. However there have been glimpses of them in the Haute-Savoie, in particular by local farmers who have blamed them for killing large numbers of their sheep herds. Wolves are adapted to running long journeys with males weighing around 35kg and females around 25kg. They hunt in packs typically ranging between 4 – 6 in number. 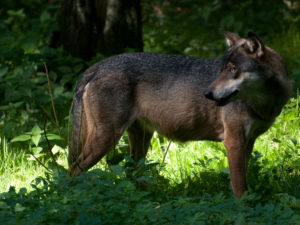 Keep an eye out for them circling the skies ready to dive down for a catch. Golden Eagles have been a protected species for a number of years and there are around 1,200 breeding pairs in the alps. They have a wing span of around 190 – 230cm and with incredible eyesight where they can see their prey from more than 1km away! The Golden Eagle focuses on all kinds of potential prey – marmots, chamois and baby ibex, as well as small game and rodents. The Golden Eagle can fly at a staggering 200km per hour making them on of the fastest birds on the planet. 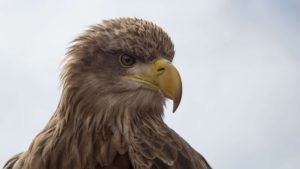 The size of a pigeon that can only fly in short bursts, preferring to stay on the ground pecking around for grass and berries. In summer it’s plumage is brown which provides the perfect camouflage against the mountain rocks. Between May and July the females will raise between 4 to 8 chicks in a nest in a rocky hollow or long grass. In winter the ptarmigan’s plumage will turn white to blend into the snowy environment. They protect themselves against the cold by building an igloo for themselves with their claws. 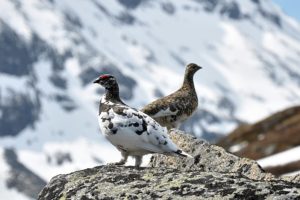 Renowned for it’s elaborate mating display, the Black Grouse is fast disappearing from the French Alps because of over hunting. It prefers bushy areas at altitudes between 1500m – 2500m. It is extremely rare to see the mating ritual that involves puffing themselves up, strutting around, leaping in the air and generally looking extremely tough.

It is worth mentioning at this point that ‘La Chasse’ (The Hunt) is engrained into the local culture of the Haute Savoie and you need to be aware of the dates of the hunting season and plan your mountain routes accordingly. La Chasse typically runs from mid-September until mid-February and involves the hunting with rifles of various animals but in particular the wild boar in the Haute-Savoie. It is permitted to walk or cycle in the areas of La Chasse during the hunting season but it is advised to wear brightly coloured clothing. There are a number of excellent phone apps that have real time updates of where the local Chasse is at various points during the day. There is an undeniable tension between the local ‘Chasseurs’ and those who feel that the hunt is dangerous, outdated and cruel to animals. However La Chasse has been part of alpine culture for centuries and is still considered the second most popular sport in France with around 1.4 million registered Chasseurs. There are obviously strong opinions on both sides of the argument but these differing viewpoints can co-exist together in the mountains as long as sensible precautions are taken during the hunting season.

So we hope this guide has provided a nice introduction to the wildlife in the Haute-Savoie and wider French Alps. We are incredibly lucky to have some unique species that are rarely seen anywhere else apart from our little corner of the mountains. The French Alps are truly stunning during the summer and spotting Ibex, Chamois and Marmots on an early morning walk makes it just that little bit more special. It is very likely that these animals will be seen during our self-guided walking itineraries that are available in both Morzine and Le Grand Massif. Our self-guided walking trips take place on Monday, Tuesday, Thursday, Friday and Saturday during our summer season between the beginning of July though to the end of September. The walks are typically between 10km –  15km long and involve between 500 – 1000m of vertical incline and take around 4 – 6 hours to complete. For more details on these self-guided walking options please click here.